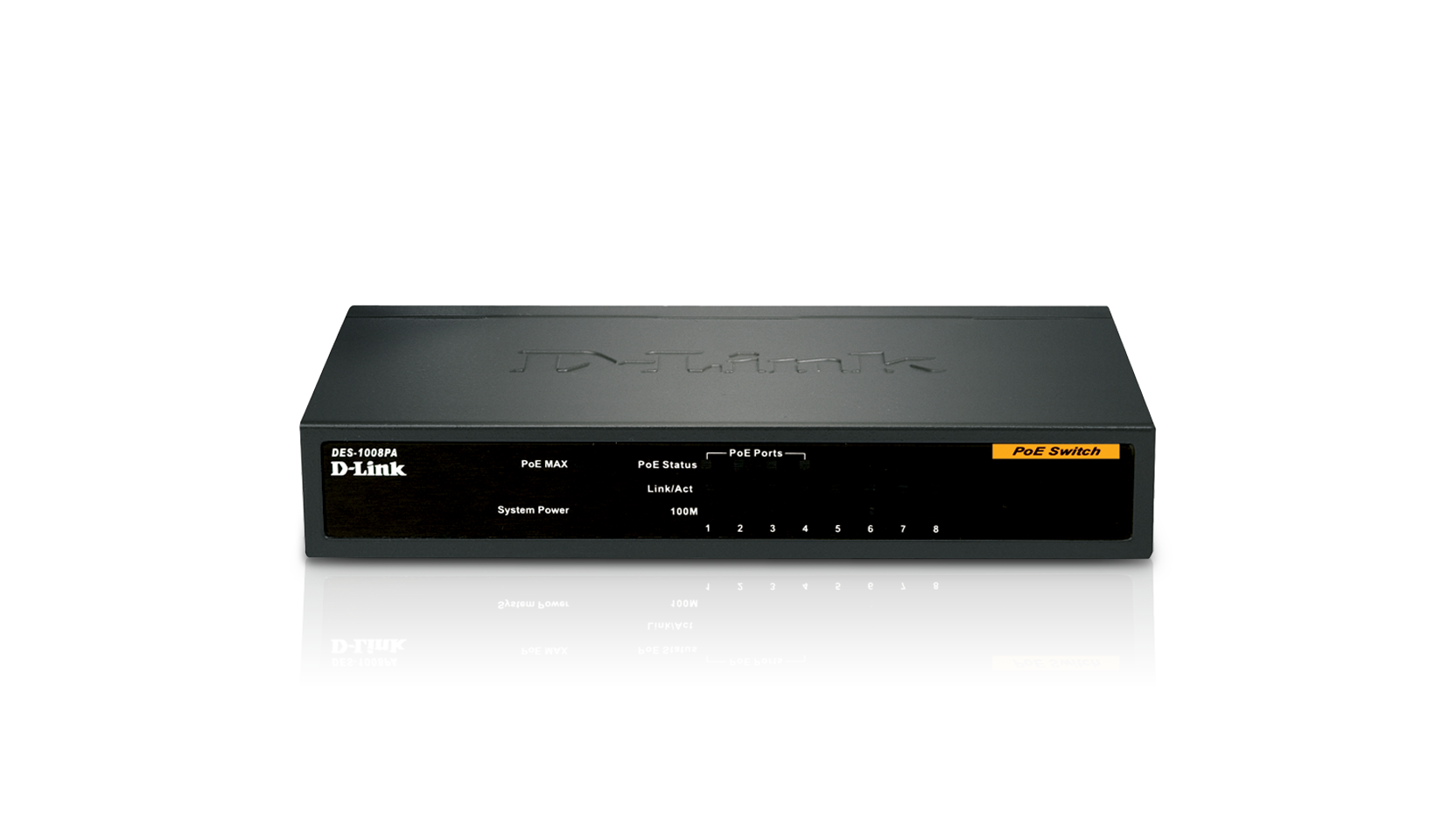 The DES-1008P 8-Port switch can convey power to up to four network devices via the usual network cables using Power over Ethernet technology.  This provides a cost-effective entry-level solution for users wishing to make the most of their network.  The DES-1008P enables users to easily connect and supply power to devices such as wireless Access Points (AP), IP cameras and IP phones via the common network cables.

As a switch, the DES-1008P can be used to share files, music and video across your network or create a multi-player gaming environment.  Users can also add multiple computers, printers, Network Attached Storage (NAS) and any other Ethernet device onto a network.

This device runs ultra-quiet, making it ideal for both home and small office use.  In addition,  it can be wall-mounted to save desktop space.

Four out of the eight ports on the DES-1008P support the IEEE 802.3af standard for Power over Ethernet (PoE). Each of these ports can supply up to 15.4W, up to a total PoE budget of 56W, allowing users to attach IEEE 802.3af-compliant devices without requiring an additional power source.
Networking devices receiving power in this way do not need to be placed within close proximity of a power outlet, allowing greater flexibility for their placement.
Compliance with IEEE 802.3af also means that when a compliant device is attached, the switch automatically adjusts the power supplied to that device.
For non-compliant devices, a PoE adapter such as D-Link's DWL-P50 can be used to still allow the switch to be the power source.

The switch is completely unmanaged, so no configuration is required and installation is quick and easy.  Support for auto-MDI/MDI-X on all ports eliminates the need for crossover cables for connection to another switch or hub. Auto-negotiation on each port senses the link speed of a network device (either 10 Mbps or 100 Mbps) and intelligently adjusts for compatibility and optimal performance.
The DES-1008P also features diagnostic LEDs that display status and activity, allowing you to quickly detect and correct problems on the network.  With wire-speed filtering and store-and-forward switching, the DES-1008P also maximizes network performance while minimising the transmission of bad network packets. Combining the convenience of PoE, superior performance, and ease of use, the D-Link DES-1008P is the ideal choice for adding PoE devices to either a home or a small business network.

The DES-1008P is a plug-and-play device requiring no configuration, which makes set-up simple and hassle-free.