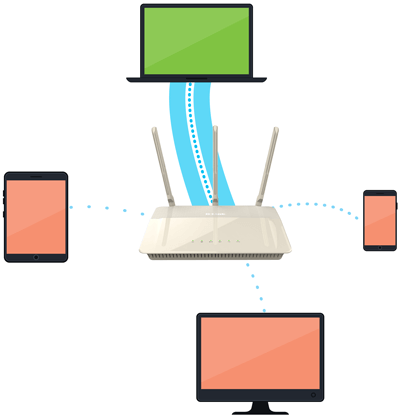 SU-MIMO: One device at a time.

What is Multi-User MIMO (MU-MIMO)?

MU-MIMO stands for “Multi-User Multiple-Input Multiple-Output”. MIMO technology has been around for over 10 years. It allowed the router to transmit at faster speeds by sending data through multiple antennas. This has now evolved from the original Single-User MIMO (where the router can “talk” to only one device at a time) to Multi-User MIMO (where the router can “talk” to multiple devices at the same time).

What are the benefits MU-MIMO?

Routers that support MU-MIMO have the ability to talk to multiple devices at the same time using multiple antennas. This means, when it’s transmitting to a smartphone using one antenna, any of the other unused antennas can transmit to other devices such as tablets, smart TVs, notebooks, at the same time. Before, with Single-User MIMO, the other antennas would remain idle until the data transmission to the smartphone was completed. So, with the average household using upwards of seven devices battling for bandwidth simultaneously, MU-MIMO allows the wireless network to work more efficiently and improves not just the Wi-Fi speed but also the number of devices that can be connected.

Wi-Fi Routers using older standards such as Wireless A, B, G, and N do not support MU-MIMO. It's a feature only available in some of the later Wireless AC routers (802.11ac). Here’s a list of Wi-Fi AC MU-MIMO Routers and Access Points.